LATEST NEWS: On North End Road, yesterday 15th May 2013 at 3:30pm, the owner welcomed into his jewellery and gold traders shop in The Shopping Palace, 347 North End Road a male customer interested to buy jewellery. An islamically dressed lady wearing a Niqab (the Islamic face veil) entered shortly after, also keen to look at his range of jewellery. Out of respect the shop owner served the lady first. But these weren’t your ordinary customers, as whilst dealing with the lady the previous customer let in a 3rd male client, when everything then changed. the niqab wearing lady suddenly started trying to attack the shop owner whilst the other men stole any cash they could find, but little did they know that the slim shop owner trains with former European Champion Abdul Karim Safari in MMA and Muay Thai in the basement of this same premises, Safari MMA Centre! As soon as he realised that it was actually a man posing as Muslim women who was trying to attack him, he fought back with his Muay Thai and MMA skills, this was enough for the other 2 men to ditch their accomplice and run as fast as they could! . The veil had now come off and this last robber tried to escape, but not lightly, the shop owner followed him straight out of the shop, as the robber tried to punch him one last time, the shop owner blocked the attack using his skills, sweeped his legs and locked him in a lock known as ‘the choke’. Someone had alerted the police who were now on their way, the robber was going nowhere as the choke is one of many effective locks used in MMA (mixed martial arts) and was easily then handed straight over to the police. The outcome of this robbery could have turned out much worse had the shop owner not been able to defend himself.

As a good will gesture to encourage all shop owners and members of the public to learn self defence, Safari MMA is offering a free 2 hour seminar on self defence and weapon disarming, with separate classes for men and women. 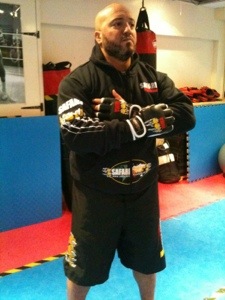 Want to join the discussion?
Feel free to contribute!

Congratulations to our Founder @khadijahsafari fo

Who here would like to learn some self defense tip

Looking for 8 women who'd like to try our Fitnasti

As a welcome to all of our new members, and those

Making the most of the summer nights, training as

We have 3 places left for our women's beginners Fi

Loving the progress made by @cheeks3hm she's been

Our women's small group team smashing out a Saturd

I need your help! Time is flying and gyms have re-

How happy are we to get a pinch of normality back

Do you find it easy or hard to trust people? Woul

Meeting at the park for outdoor training has been

Our first trial social distancing class in MK. We

Click one of our representatives below to chat on WhatsApp or send us an email to info@safarikickboxing.co.uk